Glastenbury Mountain is part of the Green Mountain range in Vermont. It is home to some spine-chilling legends, everything from the ‘man-eating’ rock to the unexplained Bennington Triangle. The Northeast side of the mountains drains into the Long Island Sound and the South east side of the mountain drains into the Hudson River. It is off the Appalachian Trail and the locals warn visitors to be survival ready and not to get lost or you might not be seen again. The woods are filled with lakes, swamps, blowdowns, and thickets.

The first part of this story is about a ghost town, Glastenbury, Vermont. It was charted in 1761 and by 1937 was unincorporated due to the small population. The towns boon era was after the Civil War. The community had a charcoal making industry and a logging railroad. The town boasted “a post office, small houses and school, and its population peaked at 241 in 1880.” (Arthur, 2014) There were several other small communities that don’t exist any longer either, Fayville and Somerset, Vermont.

The town of Glastenbury began to fail when the area experienced 2 murders John Crowley (38) was murdered in Fayville in April of 1892.  A man named Henry McDowell (also went by Henry Conroy) hit Crowley on the head with a piece of wood or a rock. John did not immediately die but lingered for a time. So, while he was alive, McDowell hung around the area. When Crowley died, McDowell took off riding the rails into Canada and came back down to South Norwalk, Connecticut. He was tried and sentenced to Waterbury State Mental Hospital for Crowley’s murder. While there he worked on the grounds and after an undetermined time McDowell hid in a bin, escaped and was never seen again. The area was already seen as mysterious and remote. John Harbor participated in the first hunting season ever in Vermont, October 1897. He was shot on October 1 and no one ever came forward. His widow went to her grave decades later never knowing who killed her husband. These stories just add to the eerie vibes of the area.

After the loss of charcoal by the harvesting of trees, the community tried to reinvent itself as a resort. They refurbished the tracks and replaced the train with a trolley that went 9 miles around the area. Glastenbury turned the old logger’s boarding house into a hotel and the apartment building with a general store into a casino.  In 1897, the community was a summer resort with a trolley, a hotel and a casino. The resort only had one season. The area had been clear cut to provide wood, and to make charcoal a popular fuel at the time. So, the soil was unstructured by the loss of trees. By 1898 there was horrific flooding that washed out the tracks for the trolley and the resort was permanently shut down. By 1936 there were 3 residents, and the town was unincorporated by the State of Vermont the following year.

They call the area the Bennington Triangle, and every paranormal trait has been attributed to the region, UFO phenomenon, Big Foot, and unexplained disappearances to name a few. The disappearances are then next unsolved issue I want to tell you about. During the mid-20th century, 5 people disappeared from the area.

Middie Rivers, 74 was a guide taking 4 hunters out on a trip. That cool November in 1945 saw the experienced woodsman leading a group of hunters. About 4pm they were headed back to camp walking through Hill Hollow near Bickford Hollow Rd. Middie pulled ahead of the hunters and was never seen again. It was reported on November 12, 1945. Within days after the disappearance the U.S. Army corps came to help find him and people were offered $4 a day to search for the experienced woodsman. (BEB, 1945) The hunters were not concerned at first as he was an experienced woodsman, familiar with the area. He was never seen again, and the only bit of evidence was a single shell from a hunting rifle. How did this experienced hunter disappear without a trace?

December 1946, Bennington College sophomore 18-year-old Paula Welden was hiking along Rt.9 on Reservoir Rd, and simply vanished. Paula had finished her shift at the college cafeteria and was in what her roommate called a ‘funk’. She put on pants and her red parka and headed out for a walk about 4p.m., December 1, 1946. An older couple spotted her walking along the road, as they spotted her red coat. This time of year, the daylight was fading into dusk. The couple said they rounded a bend in the road, and she was simply gone. Paula’s father was a well-known industrialist from Connecticut, I had difficulty finding his name even in old papers. He brought in helicopters to search for Paula and it was the lack of resources from this case the subsequently created the Vermont State Police.

Paula’s father was said to search for her the rest of his life. An interesting side note I saw in the December 12th edition of the Rutland Daily Herald, another woman 21-year-old, Louise Ann Moore of North Hampton, Massachusetts reported an attack by two men. The officials thought there was no connection, still it makes you wonder. There were various rumors about Ms. Welden that were never proven, most were entirely dismissed by police, like she was seen on a Canada bound bus, she ran away with a lover, or that her parents had something to do with her disappearance. None of these rumors were ever validated.  An interesting side note, March 8, 1948 the lower half of a woman’s torso was found in the Connecticut River near East Hartford. The article in the North Adams Transcript newspaper revealed authorities could not determine whether the torso belonged to Paula Welden, but the size, weight and tone most resembled her than any other missing woman. (n.a., 1948)

James Edward Tedford was a veteran of WWII. He was 56 and had married a 28-year-old woman named Pearl. In 1945 he was coming home from his second stint in the military to Franklin, Vermont. Upon arriving he discovered his wife up and vanished, abandoning their rental property.  She was last seen heading for the Amoco Station to buy few things, but no one had seen Pearl since. By 1947 Tedford had checked himself into the V.A. Soldiers home. In 1949 he went on trip to visit family, boarding a bus in St. Albans. He never made it to his destination and was reported missing December 1, 1949. Three years to the day after Paula Welden disappeared. He was seen by at least 14 people getting on to the bus at St. Albans.  By the time the bus stopped at Bennington, Tedford was nowhere to be found, though his belongs and luggage were still on the bus.

Paul Jepson was 8 years old. It was October 12, 1950 when he and his mother took their truck to dump so she could feed the pigs and move them to a different section of the property. Mrs. Jepson and her husband were part-time caretakers at the dump. She told Paul to stay in the truck while she worked. He either got out of the truck or was taken out of the truck between 3 and 4 p.m. Blood hounds were brought in to track Paul. They followed the scent down at least 2 miles to East and Chapel Roads. There were a pair of men’s gloves found on rocks where the trail of Paul’s scent ended, coincidence? It was on the way to Glastenbury Mountain, a place his father stated Paul had wanted to visit. That night it was pouring down rain and young Paul was not prepared for the weather. He was wearing blue pants and a red sweater. A newspaper I read stated the boy had “runaway streaks”. Paul did not go to school because of nervous defects, he had one sister in the second grade, and his parents were former schoolteachers. More than 100 people searched for Paul, from the Boy Scouts, Firefighters, State Police and volunteers. He was never seen again. (BEB, 1950) There was a theory at the time, that either the pigs just ate the boy, or the parents killed him and fed him to the pigs. There was no evidence of that, but because the papers were eluding to these stories, Paul’s father stopped speaking to them. Both Paul and Paula were wearing red when they disappeared, and why people say not to wear red on Glastenbury Mountain.

There is one more woman who went missing from the area, Frieda Langer. She is only person who went missing during this period where they eventually located her body. Frieda was 53, she and her husband were on a vacation with a cousin. She went on a hike with her cousin Herb Elsner about 3 p.m. while he was hunting a bird.  Elsner said he hopped across a small brook, but when he looked back at Frieda, she had tripped and was sitting in the brook laughing. Her trousers soaked so she decided to go back to camp and change. Her cousin left her about 150 yards from their camp, and Frieda vanished from the campgrounds. Many don’t include her story as they were near the Somerset Reservoir. A State trooper revealed he heard 3 gunshots about 11p.m that night. Though they were considered too far off. The case became more a mystery as Frieda and her husband often went hiking and camping in these woods. She was a strong woman and not afraid of anything. So how did she get so completely lost an hour before dark? (BEB,1950) In May 1951 two fishermen found the body of Frieda Langer down a steep embankment and in a deep-water hole in Deerfield river. The water hole had a fringe of bush and grass that disguised the water’s edge. It is believed she fell down the first evening as it was a dark and rainy night.

Her case was different as it wasn’t near Bennington, and they eventually recovered her body. The rest of the missing persons have never been found. I read a comment on one of the sites I visited, that said old timers in the area warned off a couple of young women who wanted to hike on Glastenbury Mountain. The women told the old timers, “It is ok we have a gun.” To which the old timers replied, “It won’t matter.” After a second set of locals said the same thing, the women abandoned the idea of going to the mountain. That is probably good judgement. (NEL, 2014) 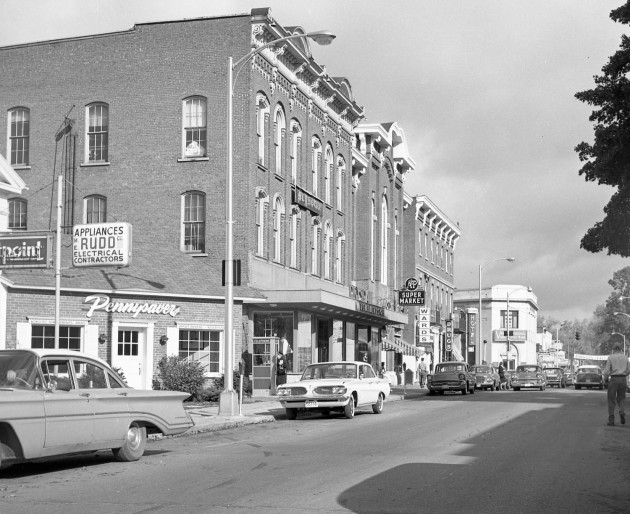