It was called the ‘Black Wall Street’ and was located in the Greenwood District of Tulsa, Oklahoma. It was a bustling community of black Americans who created a highly successful neighborhood of about 35 blocks. It featured theaters, hotels, restaurants, salons, churches, and opportunities for the residents to prosper. Around the turn of the 20th century the community was hopping due to the migration to Oklahoma of black Americans and a big oil boom. Ottawa W. Gurley was one of the wealthiest black men in the nation. Gurley sold his store in Perry, moved his family to the community, and purchased 40 acres of land. It was on this land he founded the Greenwood District.

Gurley was born on Christmas day 1868 to freed slaves. He was self-educated, raised in Arkansas and was married to his childhood sweetheart, Emma. He joined the homesteaders going to Oklahoma for land and a better life, creating the most successful black community in the nation.

The area got its name from a town in Mississippi. Gurley mapped out the area for both business areas and residential areas. He believed he was creating an upscale community for ambitious Black families. It turned out he was right. The community rivaled the success of New York City, Chicago and Atlanta with wealth, education, and advancement for Black Americans. (1)  By 1920 there were 9000 souls that lived in a 35-block area of successful business and industry. There were theatres, 2 newspapers, restaurants, hair salons, businesses that were thriving.  It was a golden age with the Black community thriving in the American way.

Though the community was thriving, it was still only blocks away from the white community. The white community was unaccepting of their neighbors, some even jealous of their success. Racism was on the rise in the U.S. and two years before in 1919 the ‘red summer’ experienced dozens of incidents provoking violence, mostly toward black Americans. The KKK was active at the time in Oklahoma.

What started the event was a black shoeshine man named Dick Rowland who interacted with a white girl who ran the elevator in the Drexel building downtown, named Sara Page. This was May 30, 1921. Rowland was accused of sexually attacking the young woman, was taken to jail and a mob gathered around. Fearing for the young man’s life, a group of black men marched to the jail in protest. Some were armed though they stayed behind the railroad tracks that marked off the boundary of the Greenwood district. The fight began right there, with the armed white mob attacking the black group. The black men fought back, but were outnumbered, and many were murdered.

Dick Rowland was born Jimmie Jones in about 1903 and was orphaned in Vinita, Oklahoma with his two sisters. A woman named Damie Ford took them in and they went to live with her at the boarding house she ran in the Greenwood district of Tulsa, Oklahoma. Damie married Dave Rowland a few years later and Jimmie Jones became Dick Rowland, choosing a new name for himself.

He went to high school in the Greenwood district and was on the football team. Oklahoma was rich at the turn of the 20th century, oil rich. It was a prosperous time in Tulsa with plenty of oil money to go around. Dick Rowland was drawn to the big oil tycoons and quit school to set up a shoeshine stand. It was said he was earning good money. On May 30, he was entering the Drexel hotel, one of the few places a black man could go use the restroom.

It gets confusing as to what happen. One account tells a story that Dick trips as he enters the elevator and reaches out to steady himself. He bumped 17-year-old Sara Page, the white elevator operator. She reacted, a couple of men saw the event and accused the 19-year-old of sexually assaulting the young woman.

Sara Page wrote out a statement exonerating Dick Rowland and then vanished. “Ellouise Cochrane-Price, the daughter of massacre survivor Clarence Rowland and a cousin of Dick Rowland, claims Dick and Sarah were in love and were planning to get married.” (2) This is further supported by the fact Dick (with help from black lawmen) made his way to Kansas City, and reported back that Sara Page there also.

By 5:00 a.m. the next morning, May 31, the white men were seen gathering in Greenwood and burning the district to the ground. It was 18 hours of horror as the businesses (over 320) and many residents were burned to the ground. There were planes flying overhead that dropped kerosene bombs on the buildings and people were running for safety from their homes. The theaters, the restaurants, hotels, salons, and all other enterprises were destroyed.

As the men destroyed the buildings, the mob murdered residents, looted, and burned their way through the Greenwood district. Martial law was declared, and the national guard was brought in to restore order, but by that time the Greenwood district was destroyed. It is estimated that about 300 black people were killed, some being buried in mass graves.

For months, the people lived in tents while they rebuilt their community. It took a total of 10 years to completely rebuild. The city of Tulsa attempted to enact a tax that would have been so steep that people would be unable to afford to rebuild, so many businesses were gone forever. The Greenwood community had their own attorney who helped fight the taxation. Still, it never regained the success it had seen previously.

At the same time there was an attempt to hide what had been done to Tulsa’s Greenwood district. Files went missing and people were threatened to not speak of the riots. It is said as Damie Rowland lived in a tent while they were rebuilding, and Dick Rowland came to visit her. There was nothing much to say, so she fed him. He was clearly aware of the fact the one harmless event he was involved with led to a racial massacre of his community.  It was then he disappeared to Kansas City. He wrote to Damie, relating that Sara was there also. He eventually moved to Oregon and was said to work in Shipping. In 1960 the letters stopped until a friend of his wrote and told the story he was killed in an accident.

The was area rebuilt, it took about 10 years, but the Greenwood District was never the same. It is said Ottawa Gurley went to Chicago to try to recreate what he had in Tulsa, but never achieved the same success. In September 1921, a Topeka Plaindealer newspaper reported that the investigation proved Dick Rowland was innocent.

Present day Greenwood district is a couple of blocks long, there is a minor league baseball field and there are plans for a BMX Motocross headquarters in the area. There are new apartments and 1/3 of the community are white residents. There is a museum being built to commemorate the 100th anniversary this week. A freeway goes through the area, and the money improving Tulsa has not reached the district. It is underdeveloped in comparison to the rest of Tulsa.  In 2021, the mayor of Tulsa G.T. Bynum brought in archaeologists, anthropologists, and historians to help excavate and identify the remains of the victims. The city commits to transparency during the process, stating it could take months. 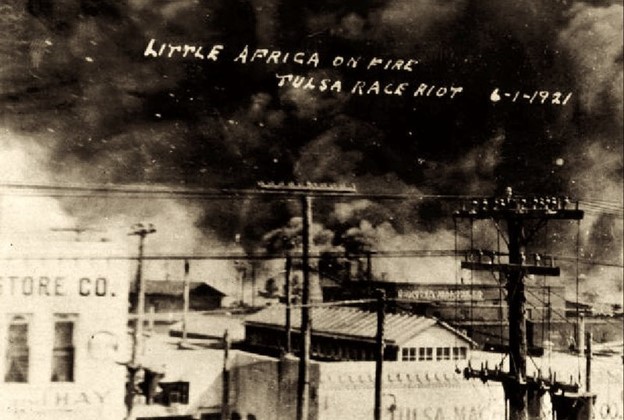 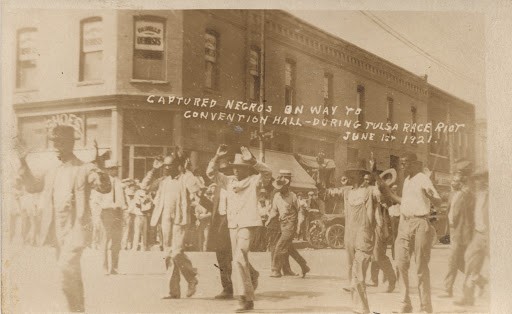 Posted at 01:53 AM in Current Affairs, Weblogs | Permalink