« Robert Bierenbaum, former plastic surgeon confesses he took wife's 'body out of the airplane over the ocean' | Main | Cary Grant: What you didn't know »

It has now been 58 years since the shocking and devastating assassination of President John Fitzgerald Kennedy. The final documents of his assassination were set to be released during President Donald J. Trump’s administration in 2018. President Trump postponed them to 2021 stating, "identifiable harm to national security, law enforcement, or foreign affairs." (Judd, 2021) Biden has now postponed the release of the documents until December 2022. Why? There are still people alive that could be held accountable. Agencies? Foreign nations?

A document from the released files in 2014 states: “The surgeon General’s report on the assassination stated the first bullet entered the president’s throat below the Adam’s apple clearly showing there were two persons involved, two distinct wounds. The first shot being fired from the bridge across the park way in front of the car. To further substantiate this there was a bullet hole through the windshield of the president’s car.” (Staff Nat. Archives, 2014) This clearly disputes the findings of the Warren Report. Allen Dulles was on the Warren Committee and had been fired by President Kennedy. He was fired for the failed Cuba take over in the Bay of Pigs and the Algiers Putsch against French leader Charles De Gaulle. His motives were always suspect to all except those trying to distort or hide information. 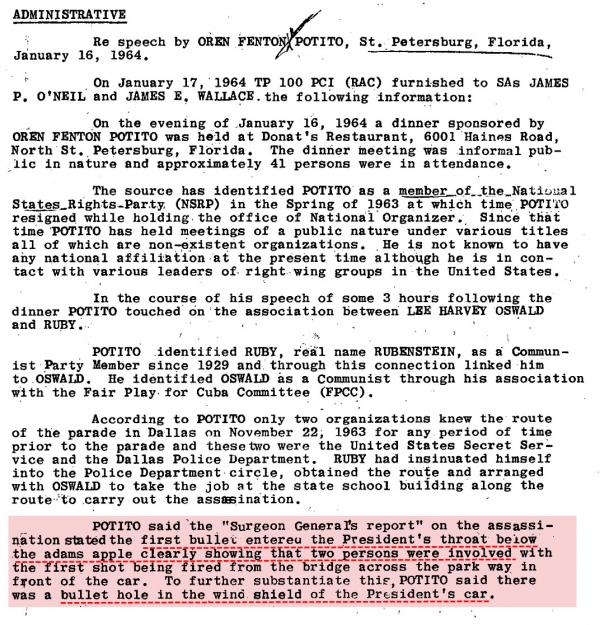 The released documents also addressed the “single bullet” theory. The Warren Commission stated of the first two shots only one hit the car. The first shot missed, and the second shot went through Kennedy and then through Governor Connelly. The third bullet was the one to the back of Kennedy’s head. That shot resulted in Jackie Kennedy climbing over the back of the car to retrieve part of the president’s skull.

The surgeon who worked on President Kennedy at Parkland Hospital, Dr. Robert McClelland created a drawing which clearly showed two distinct injuries in President Kennedy’s head, discounting the ruling of the Warren Commission. Senator Arlen Specter from Pennsylvania is credited with the “single bullet” theory of the shots fired that day at the motorcade. Here is how it goes:

The theory says that a three-centimeter-long (1.2") copper-jacketed lead-core bullet from a 6.5×52mm Mannlicher–Carcano rifle fired from the sixth floor of the Texas School Book Depository, passed through President Kennedy's neck into Governor Connally's chest, went through his wrist, and embedded itself in Connally's thigh. If so, this bullet traversed 15 layers of clothing, seven layers of skin, and approximately 15 inches of muscle tissue; it also struck a necktie knot, removed 4 inches of rib, and shattered a radius bone. It was found on a gurney. (Nat. Archives, 2016)

One of the reasons for some confusion is that in lower injury entry is the back, but the exit wound was hidden by a tracheotomy incision from a previous surgery. There has been much debate on the “single bullet” theory, which still did not explain the head wound of President Kennedy. 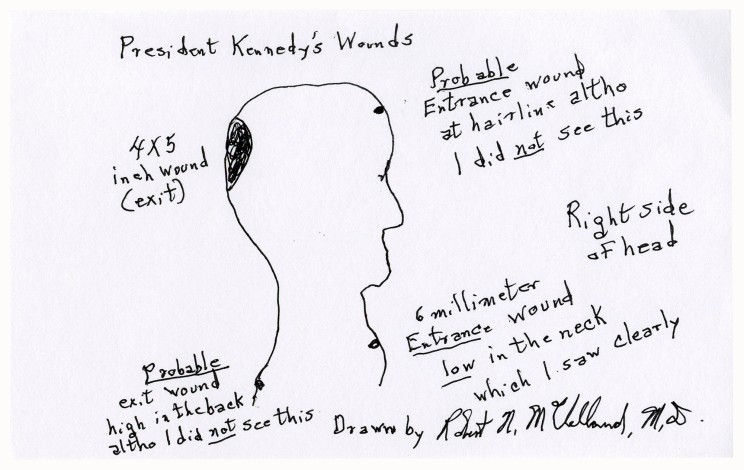 An analysis of the film taken by Abraham Zapruder who in his own words “filmed a murder” while just wanted to film the president visiting Dallas, disproved the “single bullet” theory. Governor Connelly identifies when he was hit in the frames of the movie. Which was later than what theorists of the “single bullet” theory claim. This blog was written to honor the 58th year since President Kennedy’s assassination and introduce more actual evidence from the newly released files at the National Archives. It was not meant to debate the “single bullet” theory. However, it does present the idea that such a theory leaves much of the real facts out, even as we understand them today.

What is clear is that as more evidence is revealed, the Warren Report begins to resemble a work of fiction. My questions are these:

It is still a profound piece of my own personal history, even though I was small. President Kennedy was killed because he tried to change a powerful bureaucracy that did not want to be changed. In another blog after the anniversary of his murder, I will explore what Kennedy wanted to achieve and what he did achieve. His death was so horrific we sometimes overlook his potential and real contributions to the United States.