« Ukraine: The story of Tanya | Main | The Disappearance of the Chillingworths »

Her story easily could be told many times in the 20th century. We would have recognized the story as it was common, except the part where she became a spy during WWI, was tried and executed by a firing squad. It started out as more ordinary. Something like that happened to my own mother. Young woman gets involved with an older man, is treated poorly because of alcohol, drugs, he could be abusive or behave in a myriad of ways with which she cannot live. She gets married, pregnant, and then is trapped in an unbearable situation. 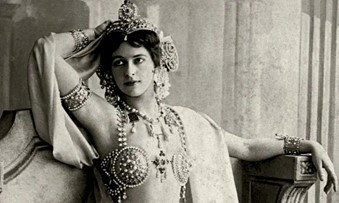 As young woman named Gertha Zelle got involved with a man through a lonely-hearts ad in the local paper, my own mother married her second husband through a situation exactly like this. Gretha was 18 years old, and his name was Rudolph “John” MacLeod. He was a Dutch Colonial Army Captain living in Indonesia (Dutch West Indies). MacLeod was 21 years older than his bride and an abusive alcoholic. One of her relatives said, “She passed from the hands of a caddish father to the hands of a caddish husband.” (Wheelwright, 2016) She had a little girl with MacLeod and finally left him.

She was born Margarethe Geertruida von Zelle on August 7, 1876, in Leeuwarden, Netherlands. Gretha would become the most famous female spy of all time known as Mata Hari. She was born to an affluent family but at the age of 13 her father abandoned the family for another woman. They struggled for the next couple of years and her mother died when she was 15 years old. Gertha went to live with her Godfather.

Gretha was an exotic dark-skinned beauty who drew the attention of men at an early age. This fact was why she was taken out of school where she was training to be a kindergarten teacher. Her godfather removed her because of the flirtations she received at the hands of her headmaster. She then fled to her uncle’s house in the Hague. (Noe, 2015) It was there she started to communicate with John MacLeod.

She married MacLeod and moved to Indonesia. It was there that Gretha took the name Mata Hari (meaning Sun in the Malay language). She also learned the culture and style of dancing that would make her famous in Europe. She had two children with MacLeod named Jeanne, and Norman. Both children got syphilis (MacLeod was openly promiscuous) Her two-year-old son Norman died due to an accidental overdose of mercury (the only treatment at the time) but Jeanne survived. When Mata Hari finally left MacLeod, she faced the dilemma most women do, how was she going to earn enough money to care for Jeanne?

Not only did she get syphilis from MacLeod but because of her life with him Mata Hari could speak German, French, Italian, Spanish and Malay. She could also dance. She moved to Paris in 1903 and began her work in the entertainment industry as a horse rider in the circus. She also posed as an artist’s model. It was in the first year after moving to Paris she became an exotic dancer using the skills and style she learned in the Dutch West Indies. She was open with her body and flirtatious which made her extremely popular. 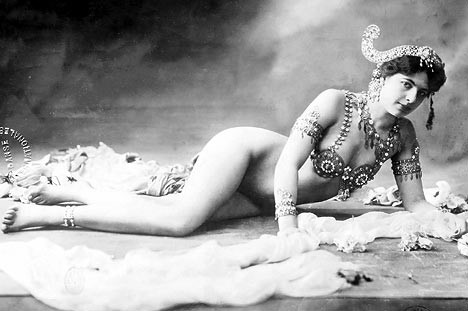 She reinvented herself as a Javanese princess of priestly Hindu birth and began a long-term relationship with a wealthy industrialist named Emile Etienne Guimet. She debuted her act at the Musee Guimet in 1905 and became an overnight success. She was sought after and photographed often during this period. Her acted included stripping down to her bra, which she never took off due to her self-consciousness around her small breasts. Her act garnered a more respectable imagine for exotic dancers and she found remarkable success around Europe. A French journalist wrote in a Paris newspaper that Mata Hari was "so feline, extremely feminine, majestically tragic, the thousand curves and movements of her body trembling in a thousand rhythms.” (Staff, 2016)

It was during WWI when Mata Hari became useful as a traveling artist. The Netherlands was neutral which allowed her to cross country borders easily. She began a very intense relationship with a Russian pilot serving in the French military named Captain Vadim Maslov. He was wounded in the war and the only way she was allowed to visit him was to agree to spy for France. (Polmer et al, 1998)

In 1916 Mata Hari was traveling to Madrid for the French government. Mata Hari promised a German Major Arnold Kalle that she would provide him with information if he introduced her to the crown prince. She never really provided Germany with anything but rumor, and information they could get from the paper. The Germans paid her, so they became angry with her when they realized she had been deceiving them. According to CIA records “French military files, supposedly sealed in 1917 for 100 years, reveal that Mata Hari was not a German spy but a free-lance agent who committed espionage only once-for the French.” (CIA Staff, 2011)

That one time was in Madrid, the only act of espionage Mata Hari participated in. The French were doing poorly during the war that they blamed her for losing 20-50k soldiers’ lives in the war. The French and Germans set her up as a scapegoat. Her purpose for taking the bait in a sting operation was to care for her blinded Russian pilot boyfriend. She was arrested and went to trial.

Gertha Zelle attempted to defend herself stating the only connections she had were from dancing across Europe. One of the worst parts of the trial is when her blinded Russian boyfriend refused to testify on her behalf. She was made an example of because of her ‘loose morals’ so Gertha Zelle, Mata Hari was convicted. A firing squad (12 French soldiers) executed her just before dawn on October 15th, 1917. She was 41 years old. Though she was convicted of espionage during WWI by France and executed, many believed she was innocent. Because of the records obtained by the C.I.A. that is the truth….

Posted at 02:38 AM in Current Affairs, Weblogs | Permalink