« Cary Grant: What you didn't know | Main | Russia and the Ukraine: Holodomor »

The Invasion of the Ukraine

We are witnessing a catastrophic war take place between Russia and Ukraine or really an invasion and genocide as I see it. Russia is invading Ukraine. Watching footage of the Russian people react, I was stunned. The videos were on Twitter done by the BBC news agency. The people appeared disconnected, vague, Putin supporting, even after seeing photographs brought out by the journalist. Even though both sides have relatives on the other side of Ukraine, Russian border.

I grew up watching the Olympics as a child. The U.S.’s biggest competitor was Russia. I was impressed with their discipline and skill. I grew to respect the Russian people as I fell in love with ballet dancer Mikhail Baryshnikov. It was still the cold war; I was educated in the United States and knew they were our enemy. The Russian people seemed strong, until this week. After watching the news feeds and their reaction I realized I had completely misjudged their strength. Then I remembered their history.

This is a nation that for 100 years has had horrible leadership. They are constantly brainwashed and controlled to the point they are docile, passive sheep. Their latest leader is in the same vein, a cruel despot that is now declaring martial law (this week), and feeding them disinformation, and massive lies about the invasion of Ukraine. The media calls it a war and I am stuck with that label. It is really an invasion of Ukraine and the genocide of people who were just living their lives.

Putin tells his nation he is eradicating Nazis and the Ukrainians are so happy, they bring flowers to the troops. There are no Nazi’s their leader Zelensky is Jewish. He says they are building nuclear weapons, or biowarfare in Ukraine. There are no nuclear weapons, and no biowarfare. The Russian troops surrender en masse, crying for their mothers. There are Russian tanks and vehicles burning and abandoned by their soldiers across Ukraine. Putin captured a T.V. tower in a city called Keshon and will make videos to show his people the Ukrainians are happy there are there using the soldiers and people from Crimea. He annexed Crimea in 2014. All information are lies to cover his miscalculation of bringing Ukraine back into the USSR family. All this because he wants to get the band back together.

Ukraine did not want to come back. Since the cold war ended, they have been their own sovereign nation. They wanted to remain free, so they fought back. Their president is Volodymyr Zelenskyy, who at one point in his life was an actor and a comedian refused to leave his nation and has been staying at his post in Kyiv. He has become a symbol of what a true leader and hero really is, in times of peril he is with his people still leading them. The Russian tanks and vehicles invading Ukraine in long caravans all have a white Z painted on the side for Zelenskyy. He has had 3 attempts on his life so far, and is still alive on March 4, 2022, still leading his nation. He has turned the Ukrainian people into warriors with rifles, guns, and Molotov cocktails to defend their land. People are seen shooting out their windows at the passing tanks and vehicles. Many Russian tanks and vehicles are on the side of the road or in the road, burned out by the Ukrainians...These people are defending their country with their bare hands. In fact a group of them just yesterday from the town of Zaporizhzhia formed a human shield around the Zaporizhzhia nuclear power plant. To protect it from the Russian army. It has been since seized by the Russians but not before setting it on fire with shelling. As the fire department went to put out the catastrophe of a fire, they were shot at by Russian soldiers….

People are still living in Kyiv, though 1.2 million Ukrainians have fled to Poland for refuge. Poland citizens have taken them into their homes with their pets. There are many who stayed in East Ukraine. One woman revealed to her Twitter followers, her mother and father were elderly, and they had cats. She did not feel with all of that they could make it to the western border in the winter. They finally left the city, and that is all I know and will reveal. Many tweet to people like me who answer them. It is watching the war in real time while its victims tweet things, “I am scared” or “I hear the bombs.”  Some do not leave because their husbands are fighting, and they refuse to go without them. Every citizen who is able is taught to shoot, including elderly women. Disabled people make Molotov cocktails, everyone who can helps. I check each day for the ones I keep an eye out for. Since they are hours ahead of my Phoenix time, the world is different for them each time I wake up.

Today is the 10th day, there are rumors that Putin will continue to rachet up the strategy. Some say he will trap troops in the cities, starving them until they surrender. Putin bombs out the cities each day, Kherson in the south, where he captured the T.V. tower to send out his videos to Russia…Then there is Mariupol which is occupied with “Russian backed Separatists and the Russian Crimean Peninsula (annexed in 2014). There is fear the troops could encircle the city and take control of the Sea of Azov and industrial infrastructure.” (1) 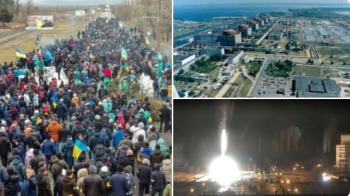 The city of is Zaporizhzhia is where they took control of the power plant, after encountering a human shield protecting the nuclear facility. Kharkiv has suffered a massive amount of bombardment. Kyiv has also taken a massive amount of bombardment, but Zelenskyy is still the president and is still there. Chernihiv has taken heavy airstrikes in residential neighborhoods where 47 people have been killed today. Since February 24, 2022, 28 Ukrainian children have died, more than 60 wounded. The total Ukrainian deaths in 10 days, 5710. The total Russian deaths 9166. In an emergency meeting the United Nations voted to have Putin remove his troops from Ukraine. It was approved by the members in an unprecedented majority 141 yes to 5 no. As of March 4th, Putin is still bombing and shelling Ukraine and has control of the nuclear plant in Zaporizhzhia. This act of war was so powerful Switzerland (a neutral country since before WWII) placed sanctions against Russia, along with Sweden a more neutral nation. In 80 years, Switzerland has remained a neutral nation. Sanctions have been placed against Putin by most European nations, including a closed off-air space around Ukraine.

Ukraine has a problem, in that it is not a member of NATO, so is not entitled to closing its air space, though many are calling for exactly that. Today the 11th day of the war, NATO released a statement saying they would not close Ukrainian air space…Which still permits Russia aircraft to shell the cities of Ukraine. Good news is the nuclear power plant at Zaporizhzhia has be retaken by Ukraine…I am going to end this blog tonight because I want to start writing more day-to-day occurrences in this invasion on Ukraine. Also, the next blog I want to talk about Holodomor. As I have learned more about Russian citizens, there are more topics to talk about.