« The Invasion of the Ukraine | Main | Ukraine: The story of Tanya »

Russia and the Ukraine: Holodomor

This week on the BBC were clips of the reactions of people to the invasion of the Ukraine. The reactions ranged from random Russian people on the street to Ukrainians that have family members in Russia. The reactions startled me. The reactions of the Russians were from nonbelief that Ukrainians were invaded (some believed they bombed themselves) to supporting Putin and everything in between. Ukrainians felt not believed and often abandoned by family in Russia. It was remarkable how many just believed their government. There is a reason I was shocked, I had always seen the Russian people as strong, hardworking, and disciplined. As I said in a previous blog, I was first introduced to them through the Olympics as a child. They were the U.S.’s biggest competitor, and they were fierce competitors at the time. Because I was young, I equated their strength with independent thinking. Didn’t they have that revolution in 1917 to shake off the tyranny of the Tsar Nicholas? 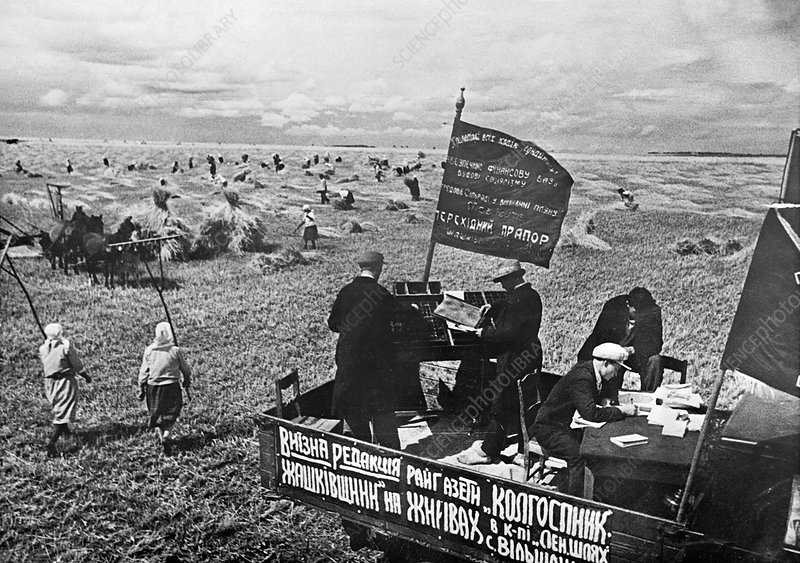 What I realized is that they as citizens are docile, passive almost sheep like. I don’t want to label all of Russians, because many thousands are out there protesting fully knowing they will go to jail, a Russian jail. The others almost resemble concentration camp victims…. subdued, passive, defending the leaders on faith or fear alone. Then I started thinking about their last 100 years of rulers, Lenin, Stalin and now Putin. I started to see them differently and I wanted to talk about one of the periods in their history that is an example of this, Holodomor. I personally did not know about this event until the last 10 years. Truth is though I love 20th Century history, I don’t know that much about Russian history. So, I did some research and remember this is a blog, not a book. Here is what I learned….

The Holodomor or moryty holodom means simply to ‘kill by starvation.’ It is also known as the ‘Terror Famine’. (1)  During the great depression of the 1930s the Soviet Union was not as affected as the rest of western civilization because it had changed its economy to communism and was more separate. Also, they were not as industrially developed, so they were more isolated.

Before the Holodomor, in 1928 there was a short of 2 million tons of grain from the farmers. Stalin was rising to power and told the country the farmers (Kulaks) were hoarding the crops. To the farmers he pretended to be on their side while seizing crops and farms. The state then set a goal for 2.5 million tons of grain to meet short fall. In a system that was to help the workers, it took their land, had them work it and sell their crops to the state for very low prices. It turned them into peasants and was considered the second serfdom.

The Holodomor (starvation) began in 1932 when the harvest came in. The previous year the harvest had yielded 7.2 tons of supplies. In 1932 it yielded only 4.3 tons…significantly less food supplies. and killed millions of Ukrainians. (2) It also affected Moldova and was the larger part of mass starvation in the USSR.

There was a policy in the integrating communism into the lives of the people of the Soviet Union. Starting in about1928 they introduced collectivism into the farming sector. The Soviet Union had a 5-year plan to blend individually owned farms with the collective state-run farms…The point was to rid the country of individual farms and go to a more state controlled and run farm system. When the grain crop failed in 1932, they did not reach out to other countries for help. They denied there was a problem and any aid they had they gave to the collective farmers. Ukraine seemed to be hardest hit as far as poor crops that year. They were hit with several policies that exacerbated the problems for them.

The law of spikelets-It decrees if you steal from a state-owned farm or any property including railways and water facilities, you are an enemy of the state. When people are hungry, they will steal food. When people are poor, they often steal, some people were put to death. (3)

Blacklisting-A blacklisted collective farm, village, or raion (district) had its monetary loans and grain advances called in, stores closed, grain supplies, livestock, and food confiscated as a "penalty", and was cut off from trade. The farm could be confiscated and cordoned off from the rest of society…It was formalized in 1932 as people began starving so “peasants would not just migrate from one area to the other”. The reasons were arbitrary, one village Mazurivka was punished because a Ukrainian general was born there. The Ukraine had many politicians and officials exterminated during and after the revolution. It is relevant today because Russia has invaded Ukraine trying once again to gain control of it, alienating themselves from the rest of the world.

Passport system-USSR purified the cities of people who did not have jobs there or reasons to be there. There were passports for Urban dwellers and 82% of Soviets lived in rural areas. The rural citizens were not issued passports so they could not go into the cities without permission. It was overseen by the collective farms or councils. Some historians feel it sealed the Ukrainian border. When starvation became an issue, the peasants left farms to find work in the cities this system stopped it.

There were also standards for the farms. They were given quotas for production which became so unrealistic the farmers could not meet them. At that point the state took over the private farms and they became part of the “Collective farm” system. The state promised the farmers, better equipment and could not deliver as Russia was so far behind on industrializing their manufacturing. At this point they also closed rural churches, so the people lost their land and their churches. Churches have always been a place of respite, spiritual enrichment, and socialization.

The collectivism of farming, a few seasons of bad harvests resulted in starvation in the countryside in 1932 and 1933. The pressure from the totalitarianism of the government created a severe famine in Russia, a large part being in the Ukraine. If you could not meet unrealistic quota, it was increased 5 times. Farmers that could not meet quotas were exiled to Siberia, and Kazakhstan. Many people died on the way to labor camps. 5 million people were sent to labor camps. (4) It is said that 4 million Ukrainians died in the Holodomor. (5) Stalin confided to Winston Churchill that 10 million people died because of collective farming (6) One source said they were so hungry they would follow anyone who fed them.

Even after the revolution of 1917 the subsequent government of USSR and now Russia has always been oppressive, manipulative, withholding on information and keeps their people in poor living standards. What was meant to make people owners of their society was replaced by a totalitarian feudal system even after the cold war ended. Again, having the top elite participating in wealth while the masses struggle to make ends meet.  A system that Europe and much of the civilized world has left behind. The Russian people are kept from information and repressed in social ways also. Where most of the world recognizes individual rights, LGBTQ, and color, Russia lags far behind in even tolerance. As the Ukraine fights for independence in a very democratic way, Russian people are being lied to and manipulated once again by a tyrannical leader. Their access to the outside world by internet blocked. Hard to accept in a world where information is at the touch of a computer mouse.