Glyndwr Michael: The Hero who never was

This another story from the 20th century that will be part of another blog. This story deserved its own blog. The story comes from Great Britain and tells the tale of a man named Glyndwr Michael who was born in Aberbargoed, Wales, on January 4th, 1909. He was a gardener and a laborer. He grew up in a town that at one point had a mine, but it was closed. So, he took the work he could get.

His father Thomas committed suicide when he was 15 years old, and he had to identify the body. His mother died 16 years later. At that point Glyndwr was 31 and alone, so he left his town and travelled to London. He did not appear to faire much better in London. He was living in abandoned buildings, not finding work, and starving. He found himself squatting in an abandoned warehouse near Kings Cross.

At that time, they poisoned the rats in London with white phosphorus in a spread they put on bread. They left the pieces of bread around for the rats to eat. Glyndwr being so hungry, it is surmised he found it and ate it. It could have been a suicide attempt also. There is no direct evidence to draw a conclusion. It did not kill him fast, so he ended up in St. Pancras hospital. Glyndwr Michael died on January 24, 1943, during WWII. He was homeless. penniless and Glyndwr died from ingesting rat poison. His story could have well ended there, what comes next takes this homeless man and demonstrates how the universe can utilize everyone.

Great Britain was in the middle of WWII and were rolling out Operation Mincemeat which will be my next blog topic. Abbreviating the operation Britain was going to place a note, and some faked documents in briefcase, and handcuff them to a dead man. The man’s body would be placed in the Mediterranean Sea off the coast of Spain. The documents were placed in the ocean so that Germany would have access to the information. It would outline a fake invasion of Greece and Sardinia avoiding Sicily. It was a diversion that ended up with some success. 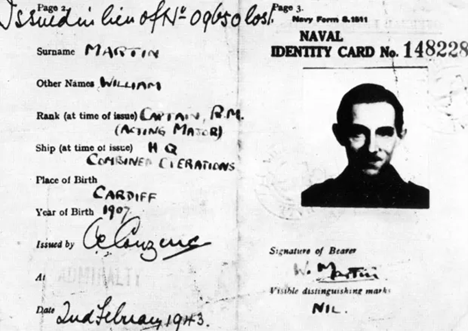 British intelligence officer Charles Cholmondeley along with Naval officer Ewen Montagu were assigned to execute the plan. They enlisted the help of pathologist Bernard Spilsbury to find an appropriate corpse. Spilsbury told them that men that died in an air crash usually died of shock not drowning, so he did not need water in his lungs. Also said that Roman Catholics would not ask for an autopsy unless the person was of note.…. This is where Mr. Michael would help Britain in the war. He fit their criteria and immediately they went to work at once setting up his new identity. They defined Glyndwr Michael as a ne’er do well and a homeless tramp. The British government erased all traces of Glyndwr Michael as if he never existed. They named the corpse Captain (acting Major) William Martin of the Royal Marines. They also provided elaborate details of Martin.

Martin was said to be an avid hunter of partridges with a revolver. That he had a fictious girl friend who wrote him letters he kept in his wallet. They got a girl named Pam from MI5 steno pool with a photo and put the photo in his wallet along with other bits of “wallet litter”. His fake girlfriend Pam wrote letters to her boyfriend. They found a look alike soldier and photographed him in uniform for I.D. They went as far as to find underwear (heavily rationed at the time) from a professor at New College Oxford that was run over by a car and killed. This made it appear Martin was well provided for. They dressed up the corpse, put his well-stocked wallet in his pocket and placed him in the Mediterranean Sea near Spain, where a fisher discovered him.

The operation was completed as a successful mission; Major Martin was discovered by a local fisherman. His body was taken by the authorities who of course went through his belongings. They began to cable the military. The cables were intercepted by the Germans as the British knew they would be. 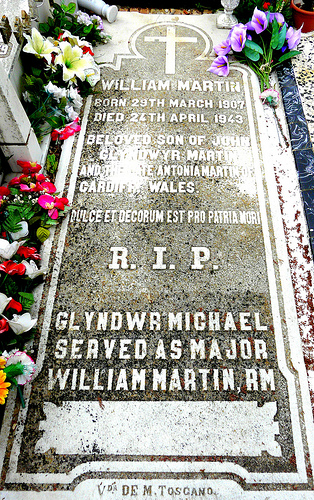 So, this man from Wales, who would have gone unknown forever, served his nation during war time as any hero would have. It was a closely regarded secret until 1998. He is buried under a grave in Spain as ‘Glyndwr Michael as Major William Martin.’ He was honored in first a book and a then a movie in 1956 under the title, “The Man that Never Was.”

Photos one, two and three- https://dirkdeklein.net/2017/01/28/the-bizarre-case-of-glyndwr-michael-the-wwii-hero-who-never-was/

1. Deklein, Dirk, (2017), The bizarre case of glyndwr Michael: the wwii hero that never was, history of sorts, https://dirkdeklein.net/2017/01/28/the-bizarre-case-of-glyndwr-michael-the-wwii-hero-who-never-was/