Operation Mincemeat: The man that never was

It is 1943 and WWII was raging in North Africa. Off the coast of Spain, a young fisherman discovered the body of man with briefcase attached to his wrist by a chain. The man was dressed in a British officer’s uniform, so the fisherman believed the man was victim of the ongoing war in Europe. This is how Operation Mincemeat began, a British strategy that changed the war.

In 1939 Rear Admiral John Godfrey along with his personal assistant, Lieutenant Commander Ian Fleming put in motion a deception operation based on a suggestion in the “Trout Memo”. The ‘trout memo’ came from a novel and compared the use of deception in war time to fly fishing. It stated, "The Trout Fisher patiently casts all day. He frequently changes his venue and his lures. If he has frightened a fish he may 'give the water a rest for half-an-hour,' but his main endeavor, is to attract fish by something he sends out from his boat, is incessant.” (Macintyre, 2010) The memo lists 54 ways that the enemy like fish can be lured or hooked. On the list was number 28. Put false papers on a dead body to mislead the enemy. No. 28 was adapted to Fleming’s own list of ideas. He helped write of methods for confusing an enemy at sea. (Smyth, 2010) Ian Fleming would go on to create the famous character spy James Bond, write successfully popular books that were turned into movies. 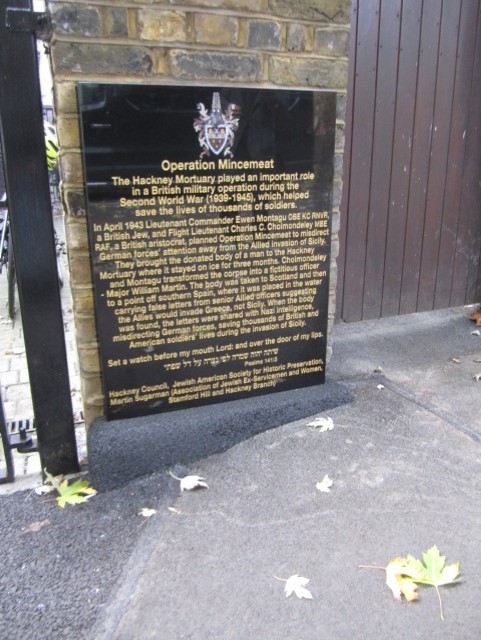 In 1943 during WWII, Germany occupied Sicily. They had a source of raw materials for the German military, including copper, bauxite, chrome, and oil. Hitler had a fear of losing the island to the allies. During the Casablanca Conference in January of 1943, it was decided the allies would invade Sicily, take it back and do it by July. That is when Operation Husky was born. Since it was such an obvious choice the allies had to produce a plan to distract the Germans. That is when Operation Mincemeat was born.

Britain decided that the Eastern seaboard of the Mediterranean was the target. They staged an area in Cairo, Egypt to practice maneuvers and set up troops, so it appeared as if they were organizing for a mission. They even placed military equipment like tanks to make it appear it was larger than it was. They hired Greek interpreters, gathered maps and currency in Greek. Then communications were set up with telephones, radio transmissions all so the Germans were certain they were headed to Greece. Finally with the ideas of Fleming and Godfrey, they just needed one more item, a dead body. They would use a corpse with a British uniform and identity. The body would be attached by a chain to a brief case with fake secret documents pointing to Greece and Sardinia as the targets of the British invasion. This is where Major William Martin played his role.

In my previous blog about Glyndwr Michael, it tells the story of how a homeless man became a hero in WWII. This is where he went on stage. Michael died of white phosphorous poisoning (rat poison) in an abandoned warehouse in England. Pathologist Bernard Spilsbury determined he was the perfect actor for the part. The British military erased all traces of Glyndwr Michael and recreated him as Maj. William Martin. They dressed him in a British uniform, provided him a wallet with his new identification, even a picture of a girlfriend. He had the appropriate wallet litter including a letter from his girlfriend Pam. Who was in the steno pool at MI5. The briefcase was attached to his wrist with a chain, and the dead man was placed in the water off the coast of Spain. It was there he was discovered by the fisherman.

Two British intelligence officers from MI5 conducted the plan, Ewan Montagu, and Charles Cholmondeley. Montagu stated there should be three criteria for the documents in Martin/Michael:

The body of Major William Martin was discovered by the fisherman at 9:30 am on April 30, 1943. Spanish officials called in Francis Haselden the local British vice-consul. Within days the British authorities called around frantically looking for the contents of the briefcase, creating some backstory. Major Martin was autopsied on May 1st and the cause of the death was listed as ‘death by asphyxiation due to drowning’. The intel about the fictious Major Martin got back to German intelligence in the area. Though neutral Spain was mostly pro German, and they became convinced the intel they received was real.

Hitler met with Grand Admiral Karl Donitz and was convinced the evidence gathered revealed the targets for the allies’ invasions were, Sardinia and the Peloponnesus, not Sicily. Hitler moved the experienced 1st Panzer Division from France to Salonika, Greece. The invasion took place on July 9, 1943, when the allies invaded Sicily in what was called Operation Husky. By the time the Germans realized what happened it was too late.

Though Germany and Italy had a pseudo relationship during the war, Hitler never trusted the Italians. He refused to join with the Italian military or to waste to many troops, so the area was poorly manned. Though the British expected to lose 10,000 during the campaign, the actual loss was about a seventh of that amount. The losses in Sicily were far less that calculated because of Operation Mincemeat. The operation went off with ease. Historian Michael Howard, while describing Mincemeat as "perhaps the most successful single deception operation of the entire war", (Smyth, 2010)

As a result of the campaign Cholmondeley and Montagu were made members of the ‘officers of the order of the British Empire.’  Hitler suspended the Kursk offensive 13 July. He was afraid the ally’s invasion of Sicily was a beginning that would result in them going after the Balkans. He wanted his troops on the ready. The Kursk offensive was a campaign in the Kursk Oblast region in USSR against the Soviets. Germany gave up the campaign to the Soviets.