The Pope, the Mafia and the Disappearance of Emanuela Orlandi

The opulence and majesty of St. Peters Basilica and the Sistine Chapel always leaves visitors in awe.  The Catholic Church is seen by many as an organization of either faith and devotion or corruption and power. The Vatican City is the headquarters of the church and residence of the Pope. The headquarters to an organization that is viewed by many with suspicion and even disgust in recent years.

Many who work in Vatican City just call it home. Emanuela Orlandi’s father Ercole Orlandi worked for the Istituto Per Le Opere Di Religione (Vatican Bank). The Orlandi family lived inside this mysterious city. On June 22, 1983, 15-year-old Emanuela disappeared while she was on her way home from a music lesson. Much like the story of Madeline McCann, there have been sightings of her all over the world. Yet none of them confirmed and the case remains unsolved.

Her brother is Pietro, he has been search for her for 36 years. He is now middle aged and greying, still searching for his sister. He has participated in a documentary to keep her name in the public eye. A Huffington Post - Italy article stated, "her name was linked to the attack on Pople John Paul II in 1981, the collapse of the USSR, the mysteries of the Vatican bank, and the Magliana Band" (Fantasia, 2018). The Magliana Band is a crime syndicate in Rome that participates in racketeering, murder, drugs, loan sharking and all other criminal activies that crime syndicates participate in.

Here's what we know about the 1983 disappearance of 15-year old Emanuela Orlandi. It was a hot muggy day in Rome, and school was out for the summer. She was on her way to a music lesson at the Complex of Sant' Apollinaire. Emanuela took a bus, got off and walked about 700 feet to class. She was late that day.  She called her sister and told her a person approached her about selling Avon products. Her sister told her to discuss it with their parents before she agreed to anything. After her lesson she talked to a friend about the offer and then left with a different to catch the bus. She was last seen getting into a dark colored BMW.

On June 23, 1983 her parents contacted the director of the music class to see if there might be any additional information. Based on what they learned, they filed a missing person report that same day. The police at first said she might be with friends or that it was an escape of love. There were phone calls from people saying that they had seen her. On June 25, Pierluigi reported he and his fiancée met Emanuela at the Piazza Novana in the afternoon. He talked about her flute, her hair and glasses, gave them many details that made him sound credible. He said she had run away and was going to sell Avon. 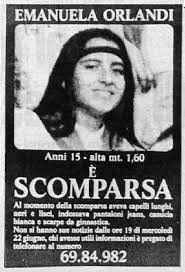 Three days later on the 28th a man named Mario called the family and said he owned a bar near Ponte Vittorio somewhere between the Vatican and the music school. He said a girl named Barbara- new to him, told him she had run away and was selling Avon… Neither of these leads could be verified or turned into anything.

Days later there was a direct message from the Pope. Pietro relates the story like this:

(Fantasia, 2018) Since the pope didn’t idly speak, it was believed he was sending a message.

Within 2 weeks of her disappearance, kidnappers called and asked for an exchange of bomber Muhammed Ali Agca for Emanuela. Agca belonged to a group called the “Grey Wolves”, a Turkish far right nationalist organization, many called terrorists. They were the master minds behind an assassination attempt on Pope John Paul II in 1981. I believe that is why he addressed the missing Emanuela Orlandi days before they made their demands.

July 6, 1983 a man with a young American accent demanded an Orlandi-Agca trade, asking the pope to participate. They said they would provide proof they had Orlandi like school ID, a receipt and a handwritten note from the girl. On July 8, 1983 a man with a middle eastern accent phone one of Emanuela’s classmates saying for the second time they had 20 days to make an exchange with Orlandi for Agca. They wanted a direct line to the Vatican, so one was installed. 16 calls were received, and nothing ever came of it.

On May 14, 2001 a parish priest of  Gregory VII church near the Vatican discovered a smallish human skull without a jawbone in a bag with the image of Padre Pio in a confessional. It has not been identified as Emanuela’s skull. Her father passed away in 2004. Her brother Pietro and 2 sisters Natalina and Frederica with the documentary are still holding out hope. Just this week the Vatican is giving permission for a search to be done to see if her remains are at the Vatican. There is so much more to this story.

Christmas 1983 Pope Wojtyla (Pope John II) went personally to visit the Orlandi family. A distinct honor, he was showing his solidarity and saying he would get at the truth. It was a magnanimous gesture, though let’s remember, Vatican City is 109 acres in size with 1000 residents, now. So, he was literally going across town to visit a family that supported the Vatican. A part of the gesture was that the Pope gave Pietro a job at the IOR, which Pietro gladly accepted and worked there many years. While working there Pietro became aware of other truths regarding the papacy, the mafia and his sister.

22 years after her disappearance when the case had long gone cold, a call was made to a broadcast called “Chi l’ha Visto” (Kee La Veesto) Roughly translated it is “Who has Seen”. After the broadcast the case was immediately reopened. The caller said that one of the original founders of the Band of Magliano (a criminal organization), Enrico De Pedis was gunned down in the street in 1990. De Pedis was buried at Sant’ Apollinare, a place reserved for the burials of princes and great artists. The caller wanted to know how that could happen. The reason was money. Archbishop Polette wanted the burial there because De Pedis made a many large donations to the church. He also deposited a large sum of money at the IOR and then disappeared.

The connection to Emanuela? One of the last times she was seen a person named Sabina Minardi was said to accompany Emanuela to a specific point and turned her over to a man wearing a religious habit in a dark car. There was a break in 2008 when a mistress of Enrico De Pedis told authorities that De Pedis organized the abduction at the request of Paul Marcinkus (An American Archbishop), the former president of the Vatican Bank. Marcinkus died in 2006. Emanuela had been seen speaking to a man in a dark BMW, and the description was similar to De Pedis. Many believe that Emanuela’s father had evidence of corruption by Marcinkus and the kidnapping was to keep the clerk quiet.

A banker named Roberto Calvi came forward with a letter to the Pope, telling him the money De Pedis deposited at the IOR that disappeared was used to finance a Polish trade union called Solidarnosc. Shortly after that Calvi’s body was found hanging in London.  The corruptions of the Vatican and the bankers is one reason it was suggested Emanuela Orlandi disappeared, that she was actually murdered.

In 2017 there were tips that she was murdered and buried in the Teutonic cemetery, which is a resting place for those of German origin. The directions Orlandi was given via the tips let him to the tomb of  Sophie of Hohenlohe who died in the 18th century. Last year workers were renovating an annex of the Vatican’s Embassy to Italy and discovered bones underneath the floor.  Immediately the most famous cold case in Italy came to mind for the authorities. Since 1983 Italy has been obsessed with her disappearance.

The Vatican has given permission that this Thursday (July 12, 2019), the tomb of the Princess will be opened in a further search for the missing girl.  For more than 36 years, Italians have been obsessed with the disappearance of Emanuela Orlandi, the 15-year-old daughter of a Vatican employee who went missing after going to a music lesson. Is this another goose chase, or could we really know what happened to Emanuela Orlandi? I know her family wants to know, yet Pietro hopes she is out there still alive.

Collman, Ashley, (November 4, 2018), Here's everything we know about the 1983 disappearance of 15-year-old Emanuela Orlandi — the cold case that is being revived after bones were found beneath a Vatican building, Insider, https://www.insider.com/everything-we-know-about-the-1983-disappearance-of-emanuela-orlandi-2018-11

Who are the Watchers?

The Book of Enoch is an ancient Jewish religious text. It is said to come from Enoch the great- grandfather to Noah.  Most of us know the story of Noah. He built an ark with 2 of every creature of the earth, and the ark survived the great floods that God unleashed on a wicked world. The old biblical tale is common knowledge to most of us.

One of the more interesting facts about this story is that most civilizations have a story of a great flood that is unleashed by deities in response to humanity’s wickedness. Sumerian folklore has a flood as well as Babylon’s ‘Epic of Gilgamesh’, Noah’s, Greece, Finland, Ireland, the Hindus, the Hopi and finally the Urcocari of South America all have legends of a great flood that cleanses the earth.

The Book of Enoch and the story of Noah captured me because I learned something about a race I only heard about in science fiction books, the concept of the ‘The Watchers’. The Book of Enoch describes ‘The Watchers’ as a group of angels that were to watch humanity. Their compassion and desire to help humanity made them lust for the women, and want to interact more. They taught weaponry, courses of the moon and the sun, cosmetics; even astrology was taught by the watchers.  They were giants in size and the floods were sent to eradicate them from the earth. God called to Noah in order to save the human, and animal kingdoms. This is according to the book of Enoch.

Many believe these are alien beings and are still around. They orbit the earth monitoring the events on the earth. In the bible, Genesis 6:1-4, they are said to be the ‘sons of Gods’ who desired human women, came to earth, mated with the women and had children. In the bible, the ‘Watchers’ or ‘Grigori’ were considered evil beings.  They were weak in their desires for earthly flesh and were fallen angels in league with Satan. The Koran has a similar story for these beings.

UFO researcher Richard Fowler was working with an alien abductee Betty Andreasson-Luca. He determined this woman’s story to be true, and through this story came to believe they are ‘The Watchers’. In fact he wrote a book based on the information the aliens gave to Andreasson-Luca. They identified themselves as “The Watchers”, guardians of the Earth. They stated they had been present since earliest human history and that they had always lived next to us. (1)  It was stated ‘The Watchers’ came here to have hybrid babies with earth women.

So who are ‘The Watchers’? Could they be our guardian angels? Or maybe they are demons who tempt us with the 7 deadly sins? Personally I did not like the movie Noah, except for the performances of Jennifer Connelly, Anthony Hopkins and Emma Watson (Hermione Granger of Harry Potter).  I did develop an interest in knowing more about these creatures. I have come to believe there is at least a grain of truth in most myths, so I am inclined to believe there is something to this story. At least I hope there is, we can use all the help we can get.